Taking a screenshot on your Mac is simple enough, but there are elements of the process that remain mysterious. Beginners may not realise where the screenshot is stored, since by default it goes to the desktop rather than to the pasteboard (as on Windows). But even quite advanced users may not be aware that you can change the destination – which you might want to do if your Mac desktop is becoming really cluttered.

In this article we show how to change where screenshots are saved on your Mac. If you want to make screenshots go to a folder or even your pasteboard, we’ll show you how.

Where are screenshots saved on a Mac?

By default, Mac screenshots are saved to the desktop and have a name such as ‘Screenshot 2018-09-28 at 16.20.56’, indicating the date and time the screenshot was taken.

If you are using Desktop Stacks (which is another feature that was introduced in macOS Mojave) you can organise your Desktop so that all your screenshots are neatly tidied away into a folder. (We explain how to do that, and some other ways to tidy your desktop in How to organise your Mac desktop.)

If you haven’t installed macOS 10.14 Mojave or later on your Mac (Mojave arrived in 2018) you will have a screenshotting app called Grab available. Grab (which was located in a Utilities folder in the Applications folder) could be used to take screenshots. Grab usually saved screenshots to your Documents folder, and if you didn’t change the name of the image it was save as Untitled.

How to change screenshot location on a Mac

If you have macOS Mojave, Catalina, Big Sur or Monterey installed it is very easy to change where screenshots are saved.

As well as your self-defined ‘Other Location’ you can choose from the following: Desktop, Documents, Clipboard, Mail, Messages, Preview.

Pre-Mojave it wasn’t quite so easy to tell macOS to save screenshots somewhere else: in a folder labelled Screengrabs, for example. In the following example we’ll assume we’ve created a desktop folder called exactly that, but you can change this process for different locations provided you know the file path.

If you’d like to revert to the default screenshot location, go back to Terminal and type “defaults write com.apple.screencapture location ~/Desktop” (with no quotation marks) and hit Enter. Then type “killall SystemUIServer” (no quotes) and hit Enter. 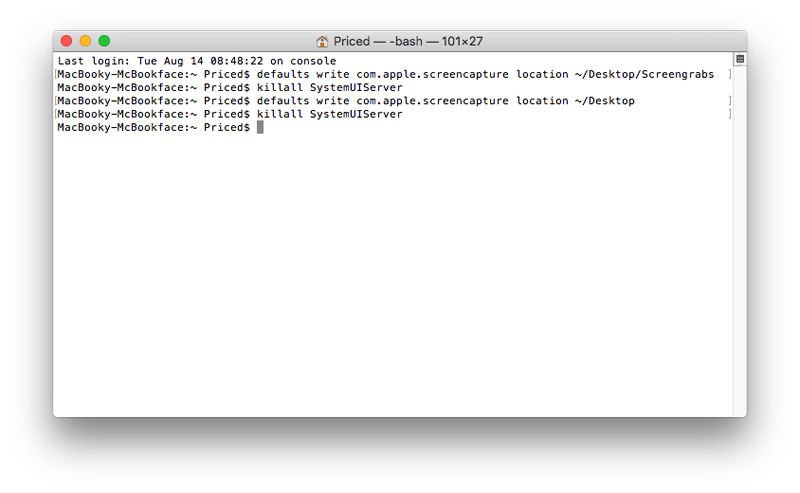 Save screenshots to the pasteboard

The Print Screen function on a Windows PC works a bit differently to Mac.

Instead of saving a screenshot direct to the desktop, in Windows it saves it to the pasteboard. You then need to open Photoshop, Paint or whichever image-editing app you prefer, create a new document, and paste the screenshot on to it.

If you wish, you can replicate this function on a Mac by changing the keys you hold when taking the screenshot.

Once you’ve used Command + Shift + 4 to create the crosshairs, hold Ctrl while dragging the cursor across the desired area. The resultant screengrab will be copied to the pasteboard – in other words, you’ll be able to paste it into Preview or a Keynote document or similar – instead of it saving to the desktop.

This trick works on Macs whether or not they have Mojave or later installed.

Here’s how to save a screenshot to the pasteboard on a Mac: