For a number of years now Apple’s Logic Pro X music production software has been one of the quiet jewels in the company’s crown. Yes, the iPhone, iPad and Mac will be used by more people, but when it comes to quality, value for money, and the continual addition of new features, Logic takes some beating.

Now with Apple Silicon support to match your creative ambitions, plus plenty of fun and forward-thinking new features, Logic Pro X is the best it’s ever been.

To see how the pro-level software compares to the free music production app that comes with every Mac, read our Logic Pro X vs GarageBand feature.

As Logic has become more and more fully featured, you’d expect the free updates to get a little lighter each time and yet, Apple seems to find surprising new ways to add to the app.

Headlining Logic Pro’s current major version, 10.7, is the addition of Dolby Atmos support in the mixing panel, as well as over 2,800 new loops and Apple silicon support. These follow on from 10.6 adding the Step Sequencer on Logic Remote to trigger audio on your iPad, and 10.5’s excellent Live Loops addition that makes it easier than ever to get started making a track.

It’s still got a steeper learning curve than its free brother GarageBand, but Logic Pro X feels more approachable than ever regardless. 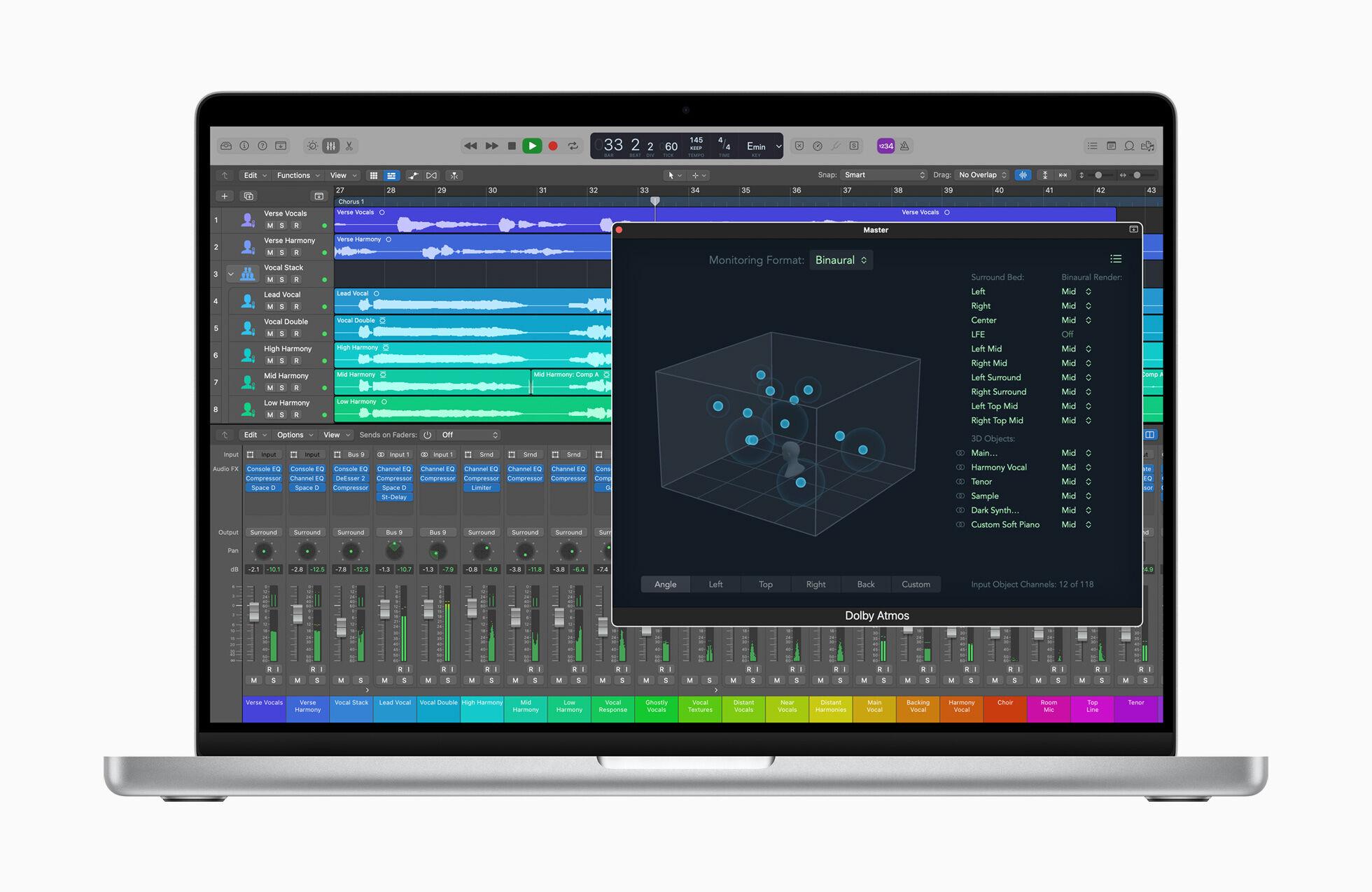 If you own a pair of AirPods, AirPods Pro, or AirPods Max, you’ll know just how impressive Spatial Audio technology can be. Whether it’s sounding like you’re in the middle of two people having a conversation while listening to a podcast, or having the feeling of being at the front of a live gig while a band plays, it’s come a long way in just a few years.

Now, Logic Pro X will actually allow users to create Spatial Audio mixes, with expanded pan controls and expansions to plugins. You can even export in Dolby Atmos, which can make video content feel much more alive – whether it’s a home movie or a blockbuster. As you can imagine, though, you’ll want some compatible headphones to be able to hear your work as you make changes.

Logic Pro X has never been shy when it comes to offering sounds, and while other audio apps will gate new library additions behind more expensive bundles or subscription services, Apple has thrown a huge number into 10.7 as a free gift.

There are over 2,800 new loops in plenty of genres, as well as 230 new instrument and audio patches, 50 new drum kits, and plenty more. That’s a pretty staggering addition to an already impressive library.

Apple’s M1 architecture means that Logic now runs much more smoothly than it ever has before. Skipping through your workspace is fluid (particularly on the latest MacBook Pro), and being able to export a track quickly to share with colleagues or friends is great.

Perhaps one of the biggest advantages is the advancement in energy efficiency. Whether you’re on an M1, the Pro, or the Max versions, you’ll find yourself less likely to need to reach for a charger every couple of hours. More demanding users will still want to stay in the studio, but it’ll make it easier to record while you’re out and about. 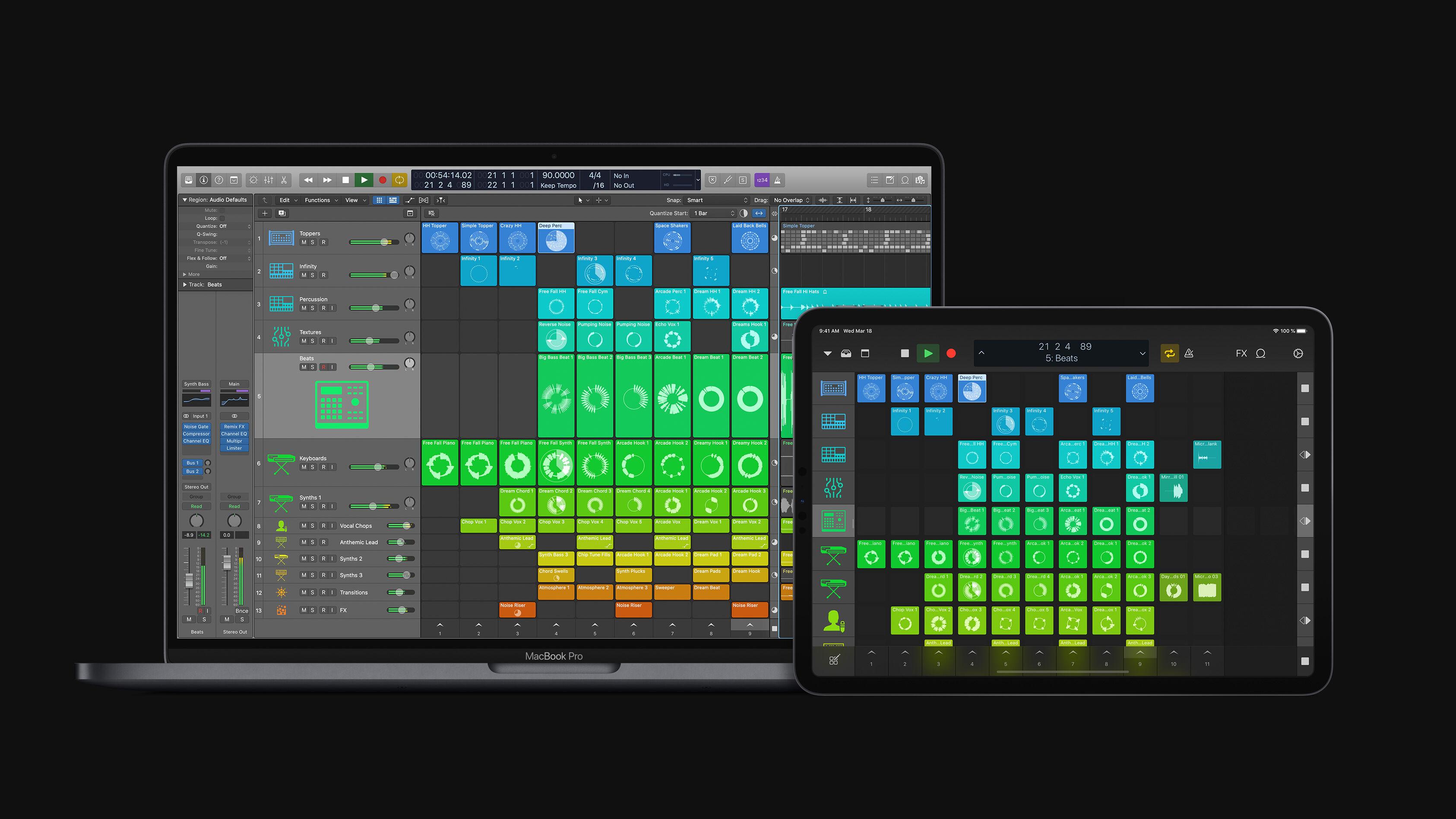 Live Loops lets users trigger cells in a grid. The grid can be made up of your own recordings, loops or samples, and are great for creating a full track from disassembled parts and disparate elements. You can add instant filters, gates and more using Remix FX, too, so you can customise sounds within the Live Loops setup.

Then there’s the Sampler which uses dragging and dropping to create a series of samples on a keyboard. Flex Time is integrated, too, allowing for a wide range of sample lengths without altering the pitch.

Logic Remote has been a companion app for iPhones and iPads for years, but in the last couple of years it’s come into its own.

Part of that is down to the aforementioned Live Loops feature. Triggering sounds from an iPad, using multi-touch to activate each one, isn’t just more accurate than triggering them regularly – it’s more fun, too.

The same works with Step Sequencer, bringing drum machine capabilities to your phone or tablet.

As we stated at the beginning of this review, Logic Pro X is one of Apple’s most polished products. We’re not shy of pointing out when the company charges too much for its devices, but the software division really does have the bit between its teeth at the moment.

Each of the recent versions have added not just a wealth of stability improvements, but a huge number of changes. Not everyone will want to trigger things from their other devices, or create Spatial Audio mixes, but that’s the joy of Logic Pro X – it can do exactly what you want, and other things you had no idea you wanted, too.

Logic Pro X was a five-star product before the update, but now that this upgrade has arrived, and is completely free to existing users, we may well have to start rethinking the maximum number of stars that can be awarded.

For advice on hardware that’s up to this kind of task, read our guide to the best Mac for music production. And for our thoughts on suitable alternatives to Logic, read best Mac music production software.