Apple recently unveiled the latest iteration of its hugely popular iPhone SE, with a few small tweaks to the already successful formula. But are the improvements enough to warrant the small price increase (and to offset the aged design), or does an older flagship model offer a better balance of features and cost?

To test this out, we compare the new iPhone SE to the iPhone 12. For a broader look at Apple’s range, check out our iPhone buying guide.

On the iPhone SE (2022) Apple opted once more to use the tried-and-tested chassis that it’s been selling pretty much since the iPhone 6 that came out in 2014. So if you’ve seen an iPhone in the past eight years there’s a good chance you’ll recognise the aged design.

On the front panel there’s a 4.7in LCD display bordered above and below by large bezels, the latter of which is the location of the Home button. 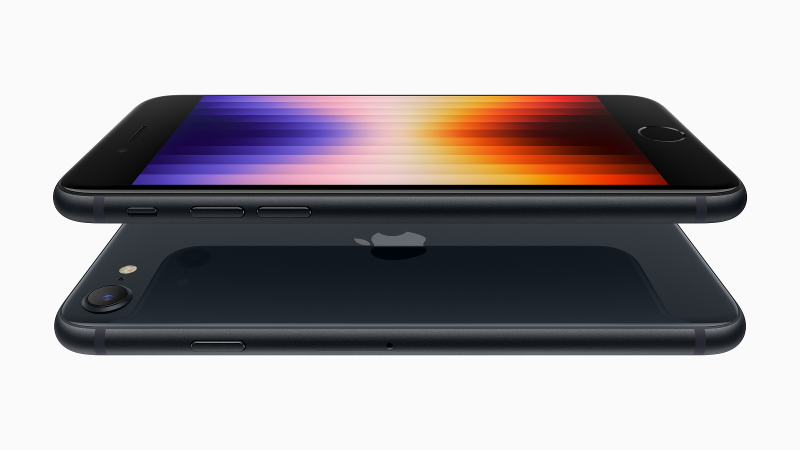 Due to the latter, you won’t find any notches at the top of the screen, as Touch ID is built into the Home button.

Apple did upgrade the glass covering on the front and back of the iPhone SE (2022) to what it claims is the ‘toughest glass in a smartphone’, so it should survive a bit of light abuse. An IP67 waterproof rating also means a quick dip won’t spell the end of the device.

Otherwise, it’s the same design we’ve all seen hundreds or even thousands of times over the years. Single camera on the back, volume controls and a power button, plus the Lightning connector situated in the bottom edge next to the speaker.

With the iPhone 12, Apple moved away from curved edges and returned to a design with shades of the iPhone 4 and 5 era. The squared-edge frame looks modern and elegant, unlike the tired iPhone SE (2022), and there are several differences between the two devices. The most obvious is the larger 6.1in OLED display, which comes with Face ID and the obligatory notch.

It’s a bigger and heavier handset overall, as you can see from the dimensions below: 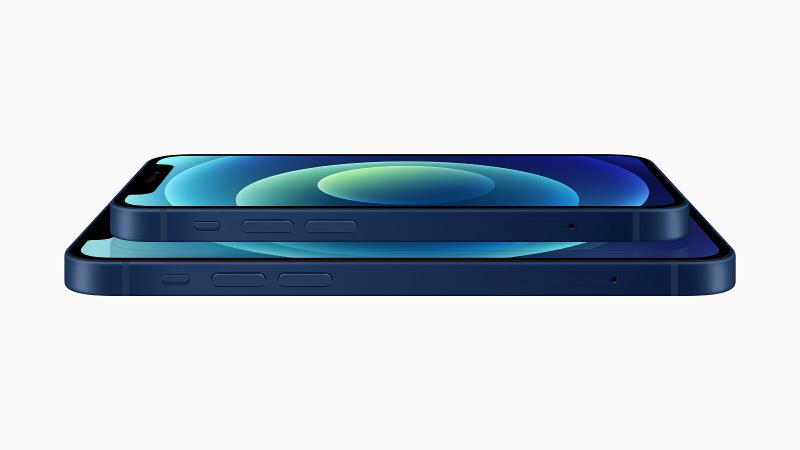 On the back of the iPhone 12 you’ll find twice as many cameras, with Wide and Ultrawide units, plus there’s support for MagSafe charging which is a step up from the standard wireless charging on the iPhone SE (2022).

The iPhone 12 is also more durable thanks to the IP68 certification, which means it can be immersed in water up to depths of 6m for a maximum of 30 minutes, whereas the SE can only go to 1m.

Side by side, the iPhone SE has the aesthetic of an almost vintage iPhone, while its bigger brother is the epitome of a premium, modern smartphone. With this in mind, the iPhone SE (2022) design comes from a time when people still used phones one-handed, so (along with the iPhone 12 mini and iPhone 13 mini), those looking for a smaller, more manageable handset could find the SE fits the bill.

The outsides are obviously worlds apart, but the components Apple puts inside are not quite as one-sided as you might suspect. Here’s how they compare.

Apple has a roguish sense of humour, as the nearly decade-old exterior stands in contrast to the latest version of its A series processors inside. The A15 Bionic is a beast; it’s the same chipset that powers the iPhone 13 range, including the current flagship iPhone 13 Pro Max. This means you’re getting incredible amounts of power in a small, inexpensive iPhone.

The iPhone 12 is no slouch at all, due to its A14 Bionic processor, but it’s not the latest chip and as such can’t quite match the iPhone SE (2022) for general performance.

As well as the design of the iPhone SE (2022) being pretty much the same as the iPhone 8, the two devices have other elements in common.

The display is a big one, as the iPhone SE comes with the practically identical 4.7in Retina HD LCD panel that features True Tone, Wide colour display (P3), a 1334×750 resolution at 326ppi, with the only discernible difference being Haptic Touch rather than 3D Touch and the tougher glass front on the iPhone SE (2022). 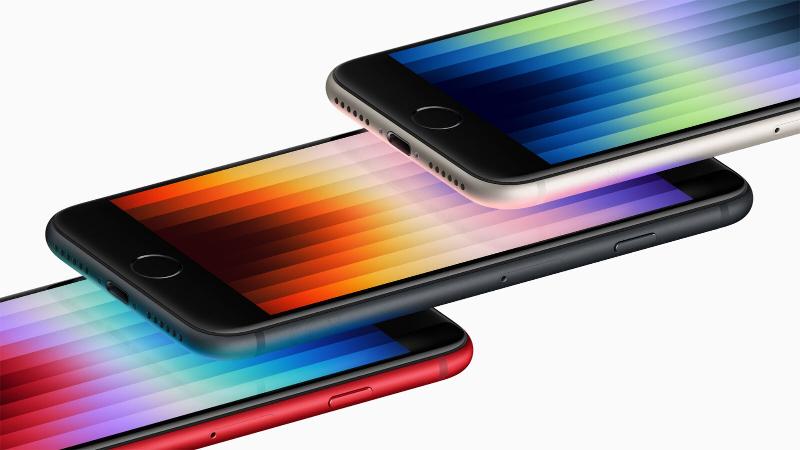 It’s different on the iPhone 12, which has a higher-quality Super Retina XDR OLED panel that measures 6.1in, and boasts a 2532×1170 resolution at 460ppi, massively improved contrast ratio, HDR and brighter output. It’s all round a much nicer display to use.

The one downside to the 12’s screen is the notch along the top edge that creates space for the Face ID camera array.

Again, the iPhone SE (2022) digs through Apple’s parts bin and comes up with basically the same 12MP, f/1.8 (Wide) camera as on the iPhone 8. The difference here is that, thanks to the A15 Bionic processor, you can access more modes and features as the advanced silicon can use its computational prowess to handle things like Portrait modes, Photographic Styles, Smart HDR 4 and Portrait Lighting effects.

The iPhone 12 can do all of this too, with the exception of Photographic Styles and offering only Smart HDR 3, but it does so with two cameras. These are comprised of a 12MP, f/1.6 (Wide) and 12MP f/2.4 (Ultrawide) that also combine to provide a 2x optical zoom (as well as the 5x digital that’s on the iPhone SE) and the all-important Night Mode that makes shooting photos in low light a more pleasing experience than on the SE. 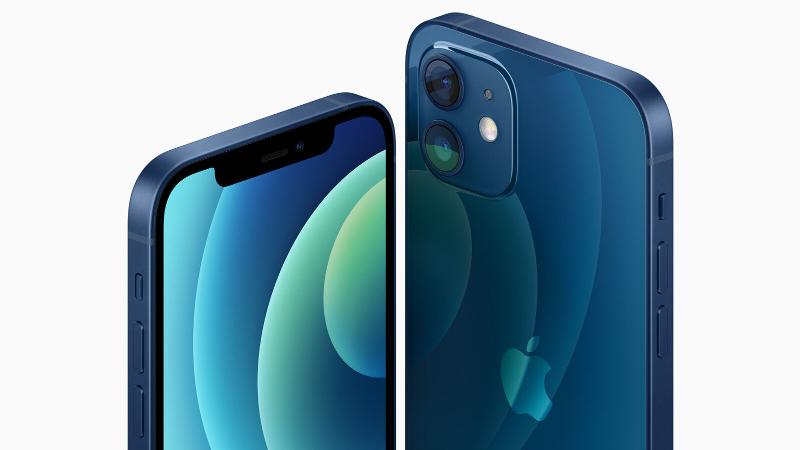 Both capture video at resolutions up to 4K/60fps and have Optical Image Stabilisation for smooth footage, but those twin lenses mean the iPhone 12 can not only perform a 2x optical zoom but also an audio zoom as well to cut out unwanted background noises. It also has the ability to record HDR video at 4K/30fps, which is impressive.

It’s a similar story with the front-facing camera, as the iPhone SE (2022) employ the old FaceTime HD camera from the iPhone 8, but the performance is bolstered by the A15 Bionic, while the iPhone 12 has the True Depth camera that also powers Face ID, and has a lot more features available.

If cameras are a primary reason for using an iPhone, then the SE can certainly take some good photos and videos, but the iPhone 12 simply offers a greater range of options and performance.

When the iPhone 12 arrived it was the first generation of iPhones to offer 5G connectivity. Now the iPhone SE (2022) brings that power to the more affordable end of the iPhone catalogue.

The big difference is that the SE only supports sub-6 bands, while the iPhone 12 also operates with the faster mmWave. This will only matter if the network provider you use offers these connections, and to be honest isn’t really going to be a deal-breaker for most people.

Alongside this, both offer Bluetooth 5, GPS, NFC and Wi-Fi 6, so they are quite evenly matched.

Here’s a breakdown of their technical specs:

The iPhone SE (2022) remains the cheapest iPhone you can buy from Apple, with the following options available:

Read where to pre-order iPhone SE for more details.

Apple still offers the iPhone 12, and here are the prices:

If you like the idea of a smaller handset, and a slightly smaller price, then the iPhone 12 mini is also well worth considering:

To see if you can save money on these devices, be sure to check our roundup of the best iPhone deals.

The iPhone SE (2022) does a good job of offering the iPhone experience that most people are looking for most of the time. It’s fast and takes good pictures and videos, plus you get to use the same iOS and apps as all the other iPhones. The design is creaking these days, though, with the tiny display beginning to feel cramped and something of a curio when compared to most other smartphones.

The iPhone 12 is a better device in pretty much all departments aside from the processor, but even that isn’t really an issue as the A14 Bionic is a hugely powerful chipset. The drawback remains price. If you want a decent everyday iPhone, then the iPhone SE (2022) is hard to beat when you consider you’ll be paying significantly less for it than the iPhone 12. Even the cheaper iPhone 12 mini pushes the costs into the upper mid-range.

It might be sporting a look that should have long been retired, but in these difficult times, the iPhone SE (2022) is just too good a deal to pass up.