The best keyboards for Mac 2021

If you spend hours typing each day, it’s important to find the keyboard that suits your needs – whether that’s a mechanical keyboard that provides satisfying tactile feedback or a keyboard packed with media controls and macOS shortcuts. There are plenty of options to choose from, and here we look at some of the best keyboards for Mac to help you decide.

We have all sorts of Mac keyboards in this round-up, from wired keyboards (for those fed up with searching for new batteries every few weeks) to ergonomic solutions to help you avoid RSI, as well as the best gaming keyboards for Mac and some pretty stylish offerings that give Apple a run for its money.

And, talking of money, there are quality Mac-ready keyboards out there that cost a lot less than Apple’s – and do more too.

You might also be interested in discovering the best mice for Mac if you want to fully upgrade your workstation.

As power users, we’re not big fans of the little Magic Keyboard that Apple includes with new Macs these days. It feels far too small and flimsy to let us type quickly when we’re working, let alone being able to take a pounding when we’re in gaming mode.

We much prefer to use this larger model, which includes a full-size numeric keypad that you can use to enter numbers into a spreadsheet or database, or just tap out a few quick calculations with the Mac’s Calculator app.

It includes a larger set of arrow keys that are moved over to the side of the main keyboard, along with an extra set of navigation keys – such as Home and End – that allow you to quickly scroll through long documents and web pages.

Moving the arrow keys over to the side of the main keyboard also means that there’s room for a larger Space bar, and Command and Alt (Option) keys, which makes the keyboard feel less cramped when you’re typing quickly. It also has no less than 19 function keys that you can use to control music playback, along with features including Mission Control and Exposé.

Previously only available wired, this is now a wireless keyboard, which Apple claims offers a month of use between charges.

Even better, the keyboard is now available to buy in Space Grey – previously exclusive to the iMac Pro – but that brings with it a markup. 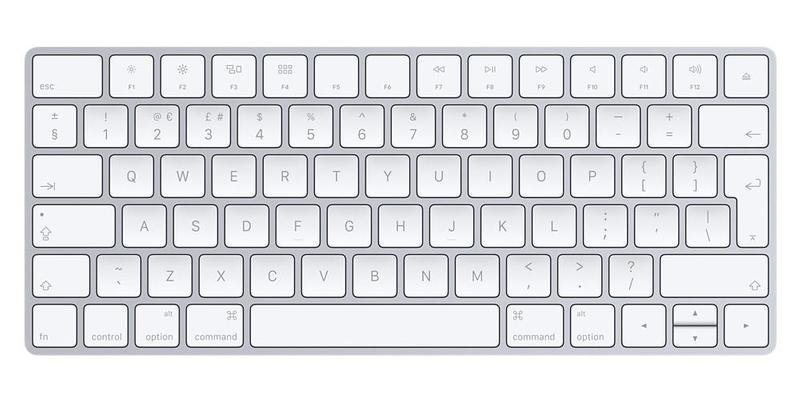 The Magic Keyboard is a wireless, rechargeable keyboard that comes included with most Mac computers. However, those of us who are on old Macs or want a new keyboard, the small Magic keyboard might be the answer.

Despite not being our favourite recommendation for power users, it still is a very versatile keyboard which can be taken on-the-go, due to its low-profile and slender design.

We do find the keyboard to be slightly expensive for its somewhat limited functionalities, but given its portability and low-profile design, some will be able to justify the purchase. 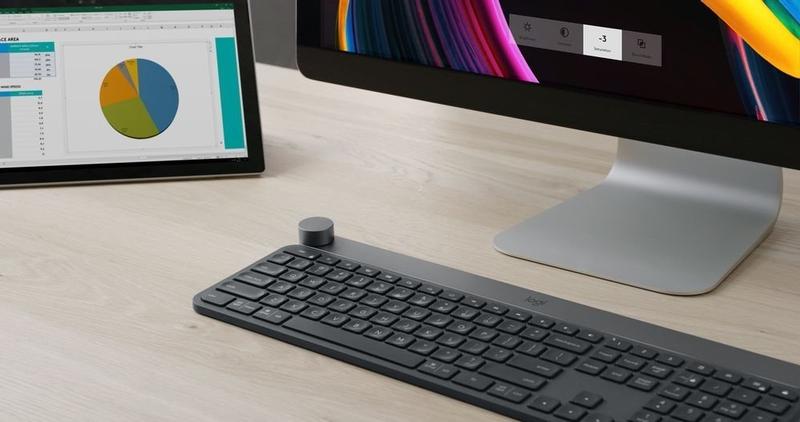 The Craft is Logitech’s wireless keyboard designed for creatives across Windows and Mac, and it’s incredible. The keyboard is sleek, gorgeous and features a solid body, providing a sturdy keyboard that will never move when in use.

The Craft features increased key stability that doesn’t only reduce noise when compared to similar keyboards, but the spherical key imprint makes it easier to orient your fingers and type quickly and accurately. The typing experience is near perfection, with both comfort and accuracy in mind.

It features backlit LED keys like many other keyboards, but with a difference. Thanks to a built-in proximity sensor, the keys will only light up when your hands are near the keyboard. Admittedly it’s only a small feature, but it really highlights the attention to detail required to develop this keyboard.

Of course, the key feature of the Logitech Craft is the Microsoft Dial-esque input dial on the top-left of the keyboard. The dial is completely contextual, and the functions will change depending on the app you’re using.

This is done automatically for popular apps like Google Chrome, Photoshop and Illustrator, but it can also be set up manually via the Logitech Options app. Tapping the dial provides access to a range of functions, from volume control to brush size to tab switching. Whatever you need, the dial can provide it.

The Logitech Craft is stunningly gorgeous and impressively practical, and is a must-have for all Mac power users, not just creatives. 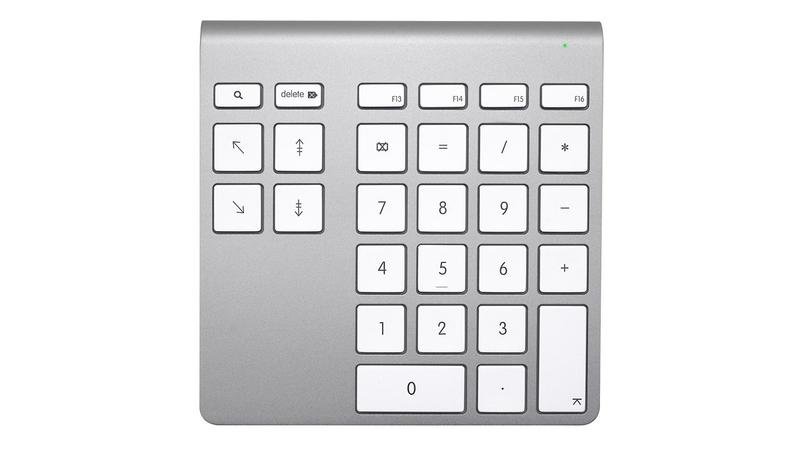 This little numeric keypad is a bit pricey – costing as much as many full-size keyboards – but it’s neatly designed and will be a useful add-on for anyone that needs to do a bit of number-crunching at work.

The design of the YourType closely matches that of Apple’s own keyboards, right down to the aluminium casing and even the little coin-notches that let you open the battery slot. It’s also the same size as Apple’s Magic Trackpad, so you can line both devices up on your desk and move easily from one to the other whenever you need to.

It doesn’t replace the Magic Trackpad though – the YourType uses Bluetooth to connect to your Mac, and you can use it alongside an existing mouse or trackpad, so you don’t have to give them up when you’re using the YourType.

There’s a full-size numeric keypad for data entry, along with an additional set of navigation keys, such as Page Up and Page down. There’s also a proper Delete key – which is missing from Apple’s smaller Magic Keyboard – and a Search button as well.

It even adds some extra function keys – F13 through to F16 – that carry on from the 12 function keys on the Apple Magic keyboard, so it works really well as an extension of your existing keyboard.

However, the wireless connection means that you’ll need to add another pair of AA batteries for the YourType, along with the batteries for all your other wireless widgets. 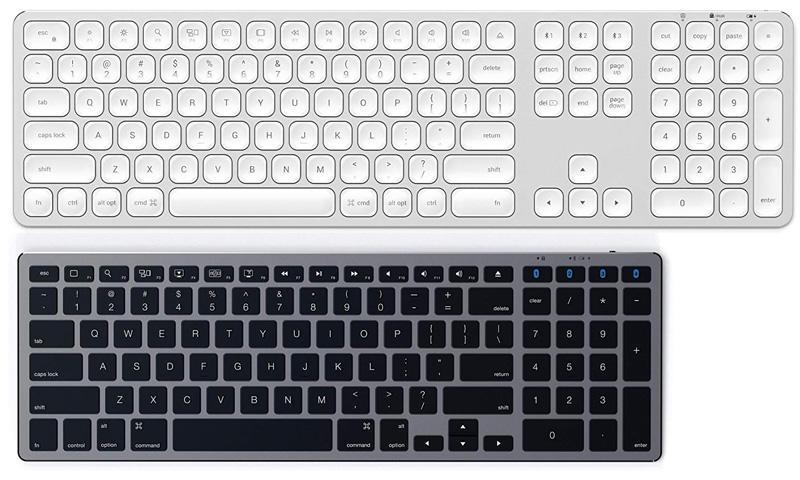 The Satechi Aluminum Bluetooth Wireless Keyboard for Mac and iOS is available in two sizes and four Mac-friendly colours.

The longer keyboard features an extra set of dedicated shortcut keys for such operations as Page Up/Down, Home, Delete/Backspace and Print Screen (prtscn). There is a multitude of keys for increasing and decreasing screen brightness, Volume/Mute, Eject, Play/Pause/Next/Previous Track, etc plus Cut/Copy/Paste/Clear buttons. It can connect up to three devices.

The more streamlined Slim Wireless Keyboard with Numeric Keypad lacks some of the many shortcut buttons of the larger keyboard, but still manages a screenshot button, plus Play/Pause, Next/Previous Track Mission Control and other keys, and can connect up to four devices.

Both work with Macs and iOS devices, and charge via (included) USB-C cable.

Both keyboards are available in Mac-friendly Silver, Space Gray, Gold and Rose Gold.

Penclic is a Swedish accessory company with a specific focus on products that help reduce repetitive strain injury and other desk-related ailments.

That means the KB3 has a firm focus on ergonomics, with a light key travel, comfortable spacing, full-sized keys, and a subtle gradient to the aluminium body.

The KB3 is a similar size and style to Apple’s own Magic Keyboard, but opts for a more colourful design, the black body broken by orange and teal highlights to illustrate the various secondary key functions.

Like the Magic Keyboard it’s wireless and rechargeable – though it uses Micro-USB rather than Lightning – and is compatible with iOS. It also has the added benefit of working with Windows and Android in case you ever need to break out of the Apple ecosystem. 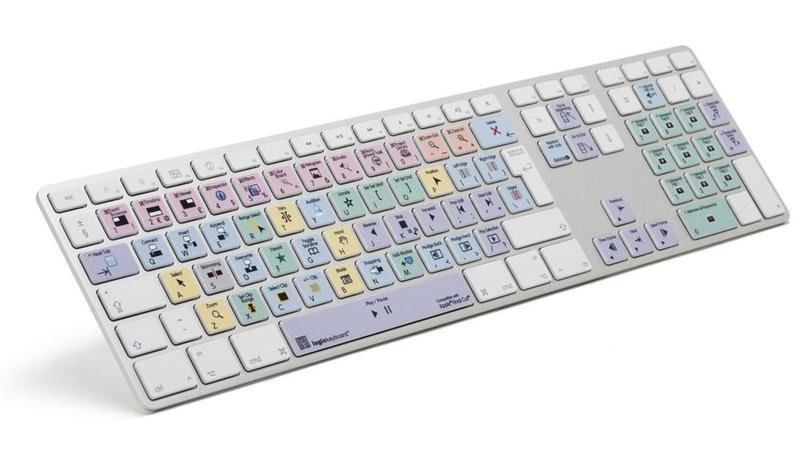 Video-editing programs such as Apple’s Final Cut Pro X often use dozens of keyboard shortcuts to activate various editing tools and commands, and trying to remember all those shortcuts can be a real headache when you’re trying to get your work done in a hurry.

Logickeyboard produces specialised keyboards designed for Final Cut and other creative applications. The basic design of the keyboard is very similar to Apple’s own keyboards, with a slimline design and aluminium casing, and a handy pair of USB ports for plugging in a mouse and other devices.

It has all the same function keys as Apple’s keyboards, so you can control iTunes or adjust the brightness and volume. And, of course, it can be used as an ordinary keyboard for typing in Microsoft Word and other programs, and there’s a numeric keypad for data entry as well.

However, it also has the most important Final Cut editing commands printed on the relevant keys, and the keys themselves are colour-coded for quick access.

LogicKeyboard also makes similar keyboards for other apps, such as Apple’s Logic Pro X and Adobe’s After Effects. 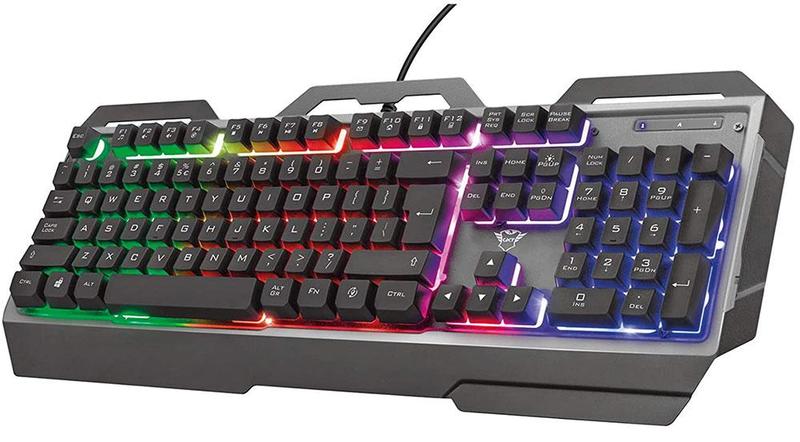 We’ve thrown this one in for fun.

The GXT 856 Torac Metal Gaming Keyboard from Trust Electronics is a gaming keyboard for Windows PCs and games consoles, such as the PS4 and Xbox One.

It works with Macs, too, and will brighten up your desk with its illuminated and multicoloured LED keys.

There’s a lot more here for gamers, but this is not a Mac keyboard so some of the media keys – such as the volume controls – don’t work with a Mac.

Also, you have to remember that the Mac Command key here is the Windows key, and that’s not where you’d naturally expect it on a Mac keyboard – Option and Command are the wrong way round. When setting it up, however, you can ensure that most of the keys conform with the Mac layout, so you can ignore that @ key right over on the right-hand side.