There’s a wide range of media streamers available in 2019, making it tough to decide which you should buy – especially if you’re not a fan of the Apple TV, our preferred media streaming device.

But don’t worry; we at Macworld UK explain the kind of things you should be looking out for when buying a media streamer, along with our suggestions of the best alternatives to the Apple TV available on the market today.

What is the Apple TV, and why might I want something else?

The Apple TV is Apple’s own set-top box running tvOS, Apple’s dedicated TV operating system, found on the fourth- and fifth-generation Apple TV. It brings with it a range of enhancements compared to older generations of Apple TV, including its own dedicated App Store filled with streaming services, apps and games, and access to Siri via the touch-enabled Siri remote.

It’s a great upgrade for existing Apple TV owners on the whole, but some people aren’t fans of the Apple TV. But why? If you’re an audiophile, you probably already know that both the Apple TV and Apple TV 4K lack an optical out port, despite featuring it in older streamers.

Rather obviously, there’s no support for Google Chromecast, although it does offer AirPlay capabilities for iOS users.

Also, the fourth-gen Apple TV is capped at 1080p unless you want to pay up an additional £30 for the Apple TV 4K, making an already expensive media streamer even more pricey, especially when compared with the competition.

Sure, the 4K-enabled Nvidia Shield TV may cost a similar price, but it offers both a remote and a game controller in the box – Apple doesn’t make its own MFi game controllers for Apple TV games, so you’ll have to buy one separately.

What should I look for in a media streamer?

Here are points that you should consider when looking to buy a media streamer in 2019:

The most important thing to consider when buying a new media streamer is the apps and streaming services available. Not all media streamers are created equal – some will offer a wide range of catch-up TV apps while others are limited. If catch-up TV is the reason for buying a media streamer, you might want to take a look at this run down here:

Resolution is also important with the rise in 4K TV sales – 4K users want to get the most of the 4K display, and although most offer the ability to upscale 1080p to 4K, it’s not the same as a native 4K input.

So, if you’ve got a 4K TV, look out for 4K-enabled media streamers like the Nvidia Shield, 4K Now TV Box, Chromecast Ultra and the Xbox One S. If you’ve still got a standard Full HD (1080p) TV, you don’t really need to pay the extra for 4K support as it won’t be noticeable on your TV.

Design is another important thing to consider when buying a media streamer, as it’ll more-than-likely be visible next to your TV. Media streamers come in all shapes and sizes, from small USB-sized dongles that stay hidden away to small boxes and even consoles, depending on what you want from it.

Some media streamers offer more than just TV streaming. The Nvidia Shield TV can be used to play both Android games and PC games via the company’s GeForce Now streaming service, and it comes with both a remote and a game controller in the box.

The Apple TV and other Android-based media streamers also offer gameplay capabilities, but only come with a TV remote in the box. Those interested in using those media streamers for gaming will have to fork out more money for the controller, so be prepared for that additional cost or try and find a media streamer that comes with a remote and a controller.

Do I need a set-top box?

Finally, you should ask yourself “Do I need a media streamer?” because chances are, the answer is no. If you’ve got a smart TV, you should have access to most, if not all, on-demand streaming services without a media streamer – just connect your TV to the internet via Wi-Fi and you should be able to stream via the built-in apps.

If your TV isn’t smart, chances are you’ll be using either Sky, BT or Virgin Media for your TV subscription. If that’s the case, you should be able to access on-demand streaming services via the boxes (TiVo, Sky Q, etc) provided when you signed up. If you haven’t got smart capabilities built into your TV, call your TV provider and inquire about an upgrade. Nvidia’s Shield TV is the ultimate Apple TV 4K alternative. It runs Android TV and grants access to not only a vast library of games on Google Play, but also Nvidia’s own PC game collection via its GeForce Now streaming service. Nvidia supplies consumers with both a remote and a dedicated game controller along with the media streamer, meaning there’s no additional cost to enjoy the gaming element of the streamer.

It also boasts 4K HDR support via the likes of Amazon Prime Video, and has access to a range of streaming services including BBC iPlayer, Netflix and Amazon Prime Video. Chromecast is also available on the device, ideal for Android users that want to stream content to their TVs.

Take a look at the Nvidia Shield TV review on Tech Advisor for more information.

Amazon’s latest Fire TV Stick is ideal for those that want to add smart functionality to their TV without the addition of a small black box sat next to it. The beauty of the Fire Stick is that it’s the size of a USB stick and plugs directly into your HDMI port at the rear of your TV – simple, no fuss.

As well as access to a range of Amazon services including Prime Video, you’ll find the likes of BBC iPlayer, ITV Hub, All4, My5, Netflix and even UK TV Play amongst popular apps like Crossy Road and Spotify.

It also boasts built-in Amazon Alexa support with an integrated microphone in the supplied remote, providing easy access to a range of Fire TV Stick features and smart home features, all in one convenient place.

Take a look at the Amazon Fire TV Stick (2019) review on Tech Advisor for more information. 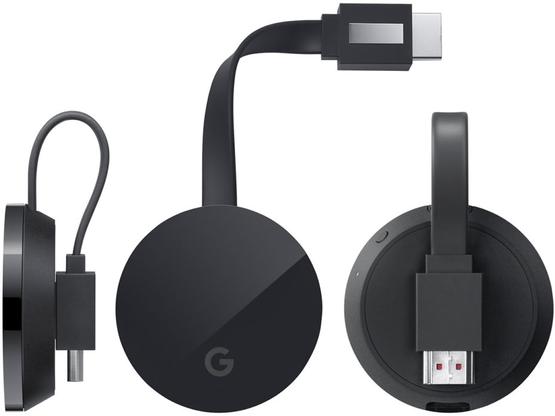 However, unlike other media streamers in this list, there are no built-in apps on the Chromecast Ultra – it provides Chromecast, a way to stream content from your smartphone or tablet to the TV, rather than providing it itself.

That means that you can stream content from the likes of Netflix, BBC iPlayer and YouTube on iOS, while Android users can mirror their entire display wirelessly.

It’s simple, but relies on your devices having enough battery power to stream content to the TV.

Take a look at the Chromecast Ultra review on Tech Advisor for more information. 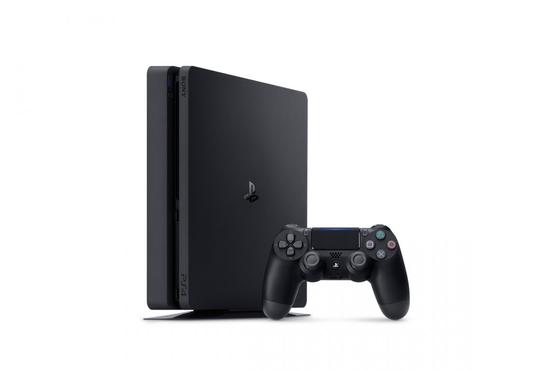 Sony’s PlayStation 4 is a decent option for gamers with an interest in catching up on the latest TV. Along with a huge library of AAA-rated games to choose from and play, the PS4 also offers a range of streaming apps.

There’s also a built-in browser for browsing the web, and it also offers a built-in DVD/Blu-Ray player for those with large physical movie collections. It’s much larger than the likes of the Now TV box and Roku 3, but offers a high-end gaming experience for those interested. 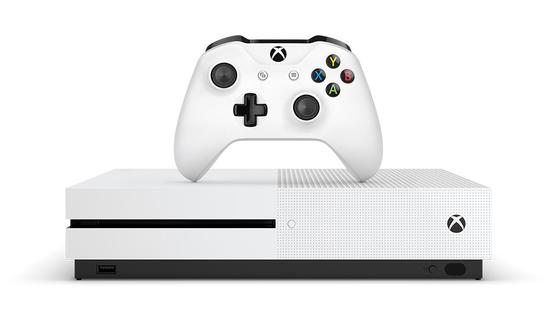 Much like the PlayStation 4, Microsoft’s Xbox One S is a great option for gamers that want to watch TV – possibly even more so than the PS4 for 4K TV owners.

Why? Alongside providing a wide range of games to play and a way to share games with your Windows PC, the Xbox One S also offers 4K media streaming from the likes of Netflix and Amazon Prime Video. It also boasts a 4K Blu-Ray player for the ultimate 4K experience, something not offered by the PS4. 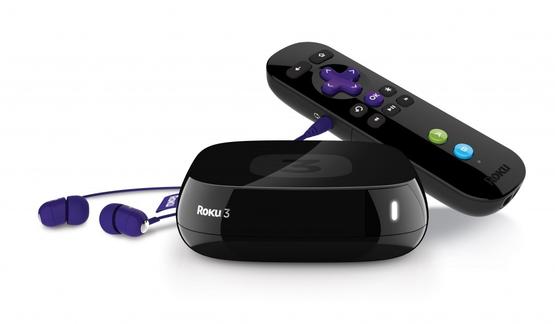 The Roku 3 is one of the most popular media streamers on the market, offering a wide range of apps and streaming services in a relatively small package. the Roku 3 offers access to Netflix Amazon Prime Video, YouTube, rdio and a host of on-demand services, apps and games available via Google Play. But it’s the hardware that sets the media streamer apart from the competition.

Why? It’s thanks in part to the supplied remote control. It doesn’t require a line of sight with the media streamer because it doesn’t use IR favoured by most remotes, allowing you to hide the Roku out of sight without having to worry about controlling it.

It also incorporates a Wii-like motion sensor that allows you to play games by waving the remote around, and offers a headphone jack for late-night movie binges that won’t wake up the whole house.

The only downside? It’s capped at 1080p so those looking for 4K output will have to look elsewhere.

Take a look at the Roku 3 review on Tech Advisor for more information. 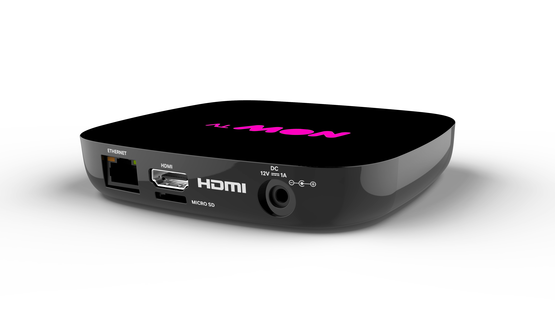 If you’re on the market for something 4K-enabled that offers access to pretty much all UK streaming services in one place, the Now TV 4K Smart Box is a good option at £45.99. It boasts access to Sky Movies, Sky Entertainment and Sky Sports – ideal both for Sky subscribers and those that only want to access certain elements of Sky’s content.

The supplied controller is Sky-orientated, providing quick access buttons for both Now TV and the Sky Store, alongside basic media control buttons. But if you thought it was only Sky content accessible on the Now TV, you’d be wrong: alongside the range of UK on-demand services on offer, you’ll find access to Netflix and Amazon Prime Video.

Take a look at the Now TV 4K Smart Box on Tech Advisor for more information.