At its Time Flies event, Apple pulled back the covers on the latest version of the hugely popular Apple Watch. The Series 6 introduces blood oxygen sensors, new colours and an upgraded processor. We see how it compares to its predecessor – the now discontinued Series 5.

If you are considering upgrading your watch from last year’s model, or if you have found a great deal on the Apple Watch Series 5 and wonder if it’s still worth getting, read on…

The new Apple Watch Series 6 is available in the usual two sizes of 40mm or 44mm, accompanied by an expanded range of colours and a choice of metal chassis. Any of the entry-level aluminium models, with a Sports Loop or Sports Band strap, will set you back £379/$379 for the 40mm or £409/$409 for the larger 44mm variant.

If you prefer a stainless-steel chassis, then these start at £649/$649, plus there are a variety of strap combinations and specialist editions, like the Hermes and Nike models, that add even further complications to the price. Titanium ups the price tag further, but if you were hoping for a Ceramic model this year you’ll be disappointed.

The Series 6 was available to buy from 18 September, you can order the new Watch Series 6 directly from Apple or purchase it from various retailers. Find out where you can get a good deal on an Apple Watch here.

As the Series 6 replaces the Apple Watch Series 5, you are no longer able to buy the latter from Apple due to it not being in production anymore. However, you may still find it available to buy while resellers clear out old stock. Before Apple discontinued it you could buy the 40mm variant for £399/$399 or the 44mm for £429/$429. Again, there were a huge variety of options available for straps and styles.

If you are thinking about buying the Series 5 from retailers make sure you don’t pay full price – as you can tell from the prices above, the Series 6 already comes with a lower cost, so it would have to be a very good deal to make it worth buying the older model.

There’s not a lot to differentiate the Series 5 and Series 6 on the exterior. Both come with Always-On LTPO OLED displays offering 448 x 368 resolutions, although Apple claims that the Series 6 is 2.5x brighter than its predecessor.

The chassis dimensions and design are the same, with a rectangular shape augmented by the digital crown and Home button on the right-hand side. Several colours are offered on the Series 6, with the new Blue and [Product] Red options particularly catching the eye. 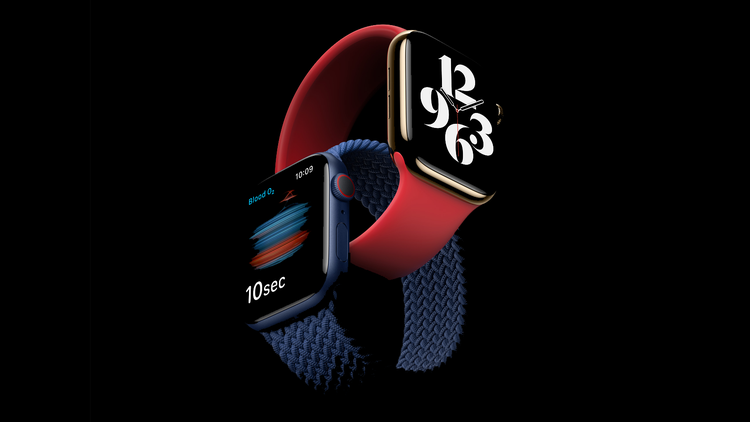 As usual, the underside is home to the various sensors that monitor health and activity, with the Series 6 bringing additional ones to the party. But, more on that later.

There are no charging ports on either model – the circular charger that charges the Apple Watch attaches magnetically to the underside and delivers power wirelessly. Note that this power adapter is no longer included in the box for the Apple Watch 6 or Apple Watch SE.

Apple claims that both the Series 5 and Series 6 come with 18-hour battery lives, but the newer version has faster recharging and can be back to 100% in an hour and a half. Should you want to take either device for a dip, then you’ll be good to go so long as you don’t dive deeper than 50 metres.

While the aesthetics are hard to tell apart, the internals provide a clearer picture of which is the newer device. Apple has included its new S6 SiP processor in the Series 6 that the company claims runs 20% faster than the S5 SiP in the Series 5. This should result in faster load times for apps, all without additional drain on the battery.

The Series 6 also sees the introduction of the U1 chip and Ultra-Wideband antennas. Apple states that these “enable short-range wireless location to support new experiences, such as next-generation digital car keys”. So, if you’re planning on buying a new BMW or Mercedes, then you might be able to unlock it with your Apple Watch. 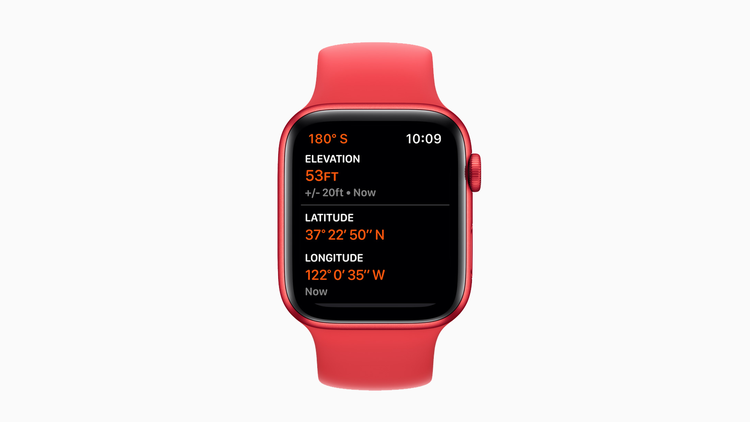 The tentpole feature of the Series 6 is its ability to monitor blood oxygen saturation. Apple has built in clusters of green, red and infrared LEDs to the underside of the Watch which shine on your wrist and then measure the reflected light to ascertain the oxygenation of your blood. It’s a way to see how well the oxygen taken in by your lungs is being transported through your veins via red blood cells. 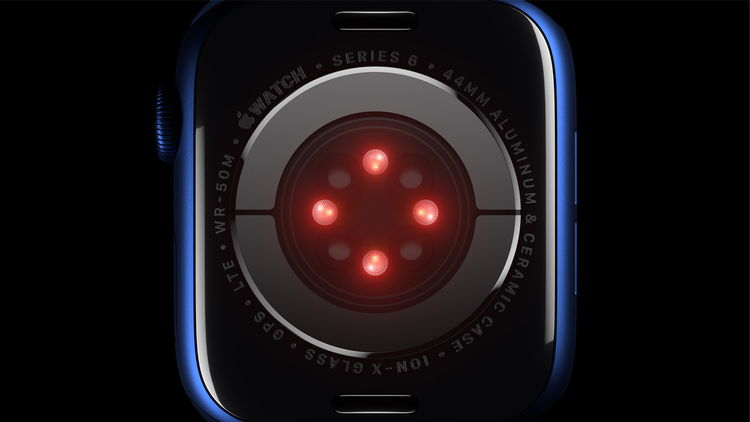 You may never have thought you wanted to know this metric, but it’s another clever way that the Apple Watch can help you stay aware of how well your body is working. The company is partnering with various medical institutes to see how this aspect can help predict and manage issues such as heart failure, asthma, flu and even Covid-19. An accompanying app allows you to access the information, and of course this will all be compatible with Apple Health.

If you want to find out more about how blood oxygen is measured read: How to measure blood oxygen with Apple Watch.

Much of a muchness

Aside from the updates we’ve already covered, these two iterations are remarkably similar. They both contains electrical heart sensors, can provide you with ECG readings, feature GPS, WiFi, Bluetooth 5.0, LTE options, 32GB of storage for music and data, plus they can warn you if your heart rate drops too low or goes too high.

Here’s a detailed breakdown of the technical specifications for both models:

The Series 5 is an excellent version of Apple’s all-conquering Watch. It boasts a gorgeous display, plenty of features, and can help you monitor your heart as easily as telling the time.

With the Series 6, Apple has upped its game in subtle but significant ways. The addition of the Blood Oxygen monitoring could be incredibly powerful if it aids the diagnosis and management of serious health conditions such as heart failure and Covid-19. The fact that the new model is faster is something we’d expect, but when we saw it was cheaper too, well that made it even easier to recommend.

To find the best deal on this new model, read where to buy Apple Watch Series 6.

How to turn off an iPad