When it comes to smartwatches, Apple has quickly taken control of the marketplace. The Apple Watch has been a huge success and appears to be continuing its dominance with the Apple Watch Series 4 (which we review here). But one company that refuses to cede the wearable space is Samsung, which has unveiled its new Galaxy Watch Active 2.

So how do the two compare? Our comparison review of the Apple Watch Series 4 and Samsung Galaxy Watch Active 2 puts them head to head for design, features, specs and value for money.

The Apple Watch Series 4 was launched in September 2018 and comes in a range of configurations depending on the size of the display, whether you want LTE or not, and the type of band you prefer.

The prices for the baseline models are as follows:

These can be bought directly from Apple, or from retailers such as John Lewis, Currys PC World, Amazon and several mobile service providers. Read our roundup of the best Apple Watch deals for further advice.

Samsung announced its new Watch Active 2 at its Unpacked event on 7 August 2019, with the official release date of 27 September. At the time of writing you can pre-order the device directly from Samsung.

As with the Apple Watch, Samsung offers its wearable in two sizes as well as with an LTE option. UK prices had not been confirmed as we wrote this, but in the USA you can expect to pay $279 for the 40mm version and $299 for the larger 44mm variant.

There’s a stainless-steel version, the standard in aluminium, which starts at $379, and LTE models will also feature this metal, with US prices starting from $429.

With the Series 4, Apple gave its smartwatch more display space, moving from 38mm and 42mm flavours of previous models to 40mm and 44mm. The size of both models remains compact thanks to Apple reducing the bezels that surround the display. This makes the new series 4 feel bigger in terms of usable space, while retaining the slim wrist profile that’s important for comfort.

The display now has curved edges, which further adds to the sense of size for the OLED panel, and Force Touch lessens the need for many additional controls. 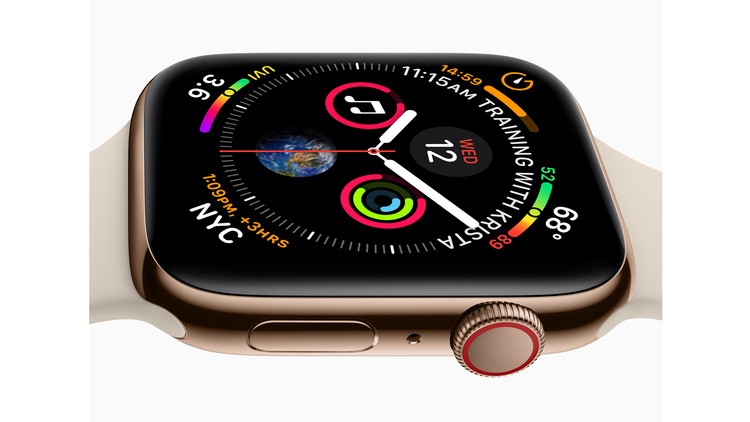 The brushed-metal chassis itself is home to the Digital Crown used for scrolling through menus, and the side button sits below to aid with accessing recent apps and using Apple Pay. Joining these are small apertures for the microphone and speakers.

Apple has made the rear of the device ceramic this time around, to improve LTE signal receptivity, with a sapphire crystal cover for the heart rate monitor. The straps are easily removable, just slide them in or out of either end of the device, plus you can pick up a huge variety of replacements as you can see in our Best Apple Watch straps guide.

Samsung has also kept its watch slim and elegant, with its circular design mimicking many classic timepieces. The aluminium frame has two buttons on the right side for navigation, and while there’s no digital crown Samsung has cleverly included a touch-sensitive strip that runs around the circumference of the display. This makes it easy to move through menus and settings just by sliding your finger around the outer edge. 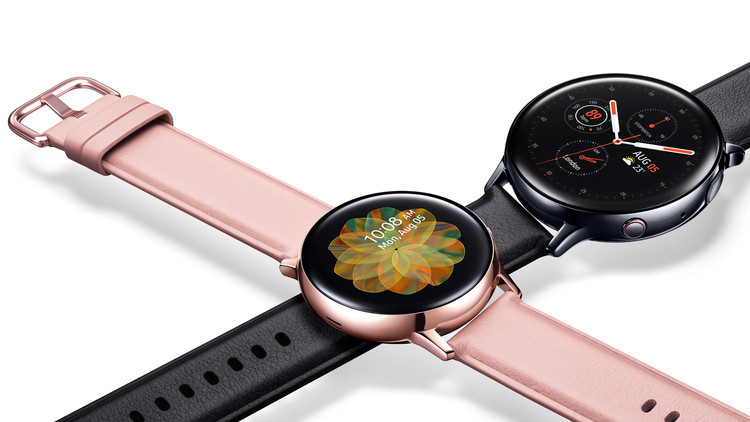 If you prefer stainless steel, then you can either choose a slightly more expensive version of the standard model or opt for the LTE versions which also use the metal for its chassis. The rear is host to the heart rate monitor sensor and the watch straps are held by two lugs that extend slightly from the main body. These also allow for replacement straps, so you can change the look to suit your occasion.

All devices have waterproof ratings up to 5 atmospheres (50 metres), so they should cope happily with swimming or watersports.

Apple kits out the Series 4 with its new S4 chip, upping the performance levels from the series 3. This is accompanied by 16GB of storage (for music and what have you), Bluetooth 5, 802.1a/g/b/n Wi-Fi, and the new W3 Wi-Fi chip.

It’s an impressive collection, but Samsung fits its own Exynos 9110 processor in the Active 2, aided by 4GB of storage, Bluetooth 5, NFC, and other requisite hardware.

Here’s a breakdown of the technical specifications for both devices:

Apple and Samsung aim their devices strongly in the direction of health and fitness, with both offering a variety of features in this regard. You’ll find not just the regular heart rate sensors but also ones for ECG, with the Apple Watch bolstering this with software that not only looks for elevated heart rates but low or irregular ones too. 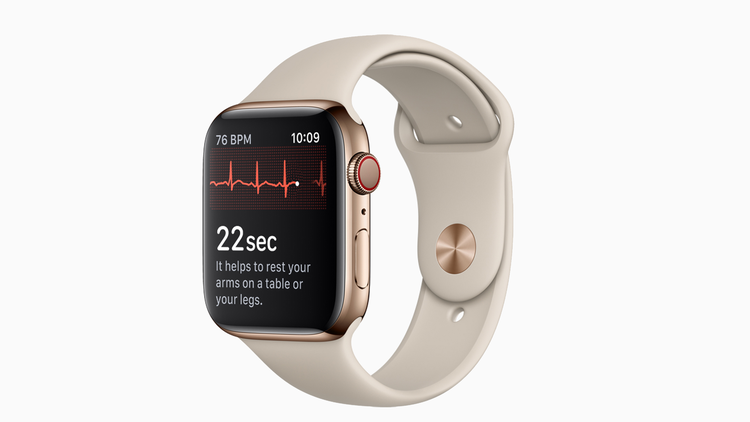 Samsung also monitors your heart for unusual activity, as well as keeping an eye on your stress levels too.

Another unique idea from Apple is that of fall detection. This allows the Apple Watch to automatically place an emergency call if the wearer is detected having a tumble and then not getting up again. The device will alert the wearer of its intentions after a short period of inactivity and ask if it needs assistance. Should there be no answer, then a call will be made to the emergency services.

Apple has gone to town with the sporting elements of the Series 4, deploying sensors and software that monitor your runs not only in terms of distance, time and elevation, but also analysing steps per minute to calculate your cadence. There’s also rolling lap times, plus the device automatically senses when you begin a workout, meaning you don’t lose out on recording a session just because you forgot to hit the start button.

The Apple Watch Series 4 is also able to track swimming, making it the ideal partner if you like to mix up your exercise regime. 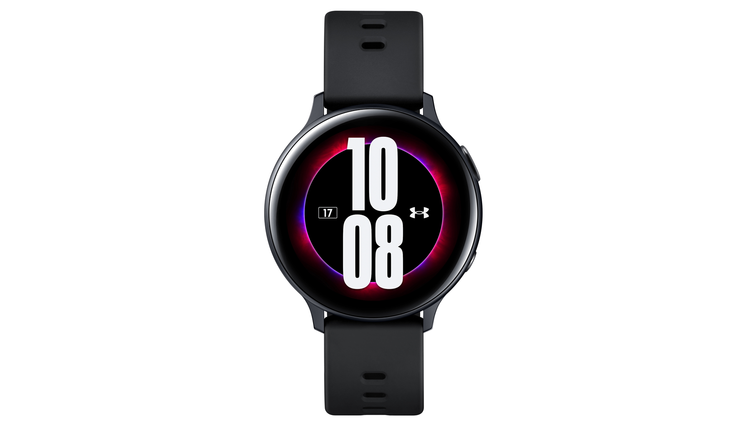 Samsung is no slouch, though, with the Active 2 offering audio and haptic feedback coaching for activity and to motivate you during a workout. There’s even a dedicated version aimed at runners, the Under Armour edition, which includes the Map My Run app which monitors your running cadence and personal best times, and offers form coaching to improve your technique especially when paired with Under Armour’s Hovr range of running shoes.

watchOS has developed significantly since its introduction on the initial Apple Watch.

Alongside the various features mentioned above it also provides close integration with iPhones and other Apple products. This allows you to control media, receive calls and reply to messages, unlock your iOS or macOS device, as well as navigate your way around unfamiliar places thanks to Apple Maps, pay for your shopping with Apple Pay, and keep an eye on your activity levels. 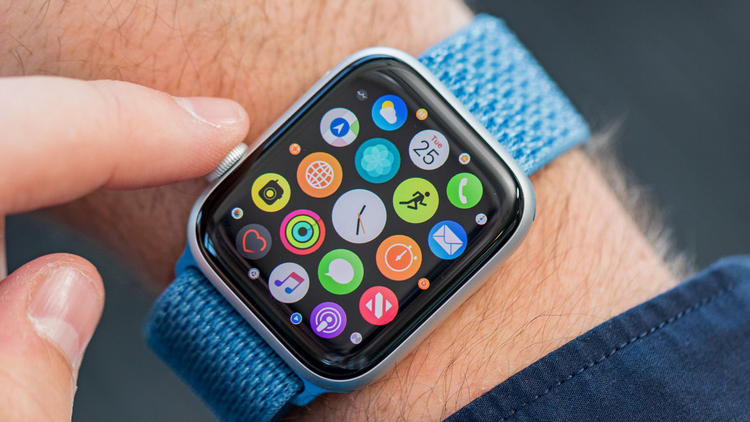 The interface is simple to use, avoiding hiding too many things in menus or relying on multiple clicks or swipes to access information. It remains easily the most polished and intuitive smartwatch interface around, so long as you have an iPhone.

The Active 2 runs on Samsung’s Tizen OS and offers a clean and quickly understandable environment. The circular touch-sensitive strip makes navigation easy, much like the digital crown on the Apple Watch. We need to spend more time with the device to see it performs in daily use (as we have with the Apple Watch Series 4) but initial impressions are good.

One advantage the Active 2 has over its rival is that it will work with iPhones, albeit in a limited fashion where it receives messages but can’t reply, whereas the Apple Watch Series 4 is strictly fastened to watchOS and iOS.